The Long Excuse: Rise of the Sleepless Phoenix

So I’ve been busy lately, actually found myself in a position where I’ve had more offers to work than I can take on, I'm not trying to blow my own trumpet or brag about it but its felt nice to be so busy in the work i love to do. so that’s another excuse for the long absence but over the next few posts I’ll go over what I’ve been doing recently and show some pretty pictures along the way!
Mainly I’ve been whip cracking at the comic book work, if you haven't been following the comic book realms then you may or may not of heard of the Demise of Insomnia Publications, unfortunately a book I’m working on DreamSolver was part of this Publisher and was caught in an inevitable "rights to" battle along with all the other creators and their children. So a fairly drawn out battle to force the hand of the appropriate head to officially excuse everyone and their projects from the Insomnia camp ensued.
Eventually we were released and Insomnia was no more.

Although out of this fray the creators Including the DreamSolver Camp of myself and Luke Foster joined forces to form the Group of 'The Sleepless Phoenix' mainly this group had the intention to re form and print up a short stories book originally intended to be published through Insomnia, funnily enough it had the Theme of Survival and was dubbed 'Survival Stories' The stars where far too perfectly aligned so we have seized the chance and created a Kickstarter plea website to get funding for the book and explain the story behind the book.
DreamSolver had intended to have a new preview go into this book and we'd pulled together a nice little section to be included in the original, so naturally we where quite gutted to be cut short of that opportunity to get some more audience for the book and our first printed proof of our work.
So I’ve done what I can do to help with the Survival stories book anyway, I’ve done a few pin ups and been assigned to do some sketches of the High Donators which they would get with they're own copy of the book.
The Pin ups I’ve done are from a personal selection of the short stories in the book. i tell thee no lie when I say there are some astounding shorts in that book, both in writing and Art, so I was glad to have the opportunity to pay some homage to the great work in that book. Here's a few of the Pin ups I’ve put into the book. 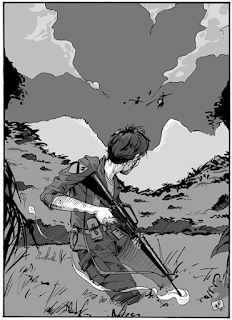 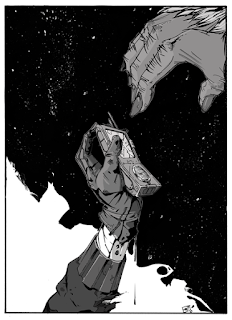 I’m not the only one to add some pin ups and sketches I’m sure, so I can only imagine the wad of creation this book is going to behold.
Since the kickstarter site was set up we smashed our goal and gone beyond the target! So right now if you haven't already thrown in some dosh I’m not sure if you can get a mail delivered copy or big bonus package, but you will be able to get a signed copy if you head to the Birmingham BICS this year so get to the table if you can and get yourself a copy and chat with some of the guys working the table.

I'm extremely happy and grateful to have been part of this creative collective who have shown nothing but passion and willingness to endure and prove their worth, I hope to work with these guys again.
Posted by Chris Wildgoose at 10:59 No comments: