So I’ve come back to milk a bit more of the True Grit: Mean business job I had at the beginning of the year. I’m actually still playing with some other bits in my spare time for practice but I’ll save that until I’ve finished it, so consider this the first part of a True Grit MB extension.
I’ve wanted to post this since the comic came out but I’ve held it off for a while, mainly because I’ve had a bunch of work on, and general forgetfulness…tsk, I could talk about this type of thing until your eyes melt out of your skull so I’ll try to keep this as brief but interesting!

Anyway, at the end of the project I was most pleased with the Cover, the True Grit interior had a tight, tight deadline (3 weeks to be exact) and the cover was due after the interior. Thinking I had at least a day or two before working on the cover I did the human thing and went to bed. Alas no sooner had I got into bed I had an email saying the cover needed to be in ASAP so I slumped back up to the desk and got brain storming.
From the first email about the Job, one desire of the writer was for the cover to emulate that this was All about Mattie and her tale of revenge. One pieces of reference handed to me was a cover of an old ‘Dime Novel’ with a young western type girl holding a rifle (pictured below). Also the Original Cover art of the Charles Portis Novel (Also pictured below) depicted Mattie holding a rifle too, so from the start having Mattie holding a gun was always a must. 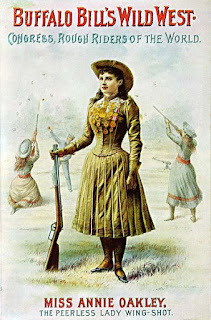 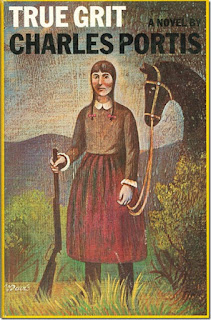 This here is one of my first character sketches I’d drawn of Mattie, so the set up was always in mind. 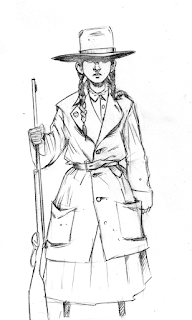 In the film I loved the way Mattie wore the coat and Hat of her father, so not only did it emphasise how young she was but it had that personal element of Mattie on a journey for her father’s justice. So I absolutely had to draw her in her whole adventure get up. Also with the big hat I got to give her a cool cast of shadow over her eyes
Below you should find the two variations of the cover I’d initially drawn up. This was for some variety to show Paramount but also I had reasoning behind them. The Buffalo Rifle cover was supposed to emulate the rifle that exacts the final blow into Chaney, again going back the original Portis novel, the cover art has Mattie holding said rifle.
Also I have to note that in the riffle cover Mattie suffered a bit of a bucktooth, also you can see the original eye shadow which was removed for the final cover, it worked in the Black and white and sketches but with colour I just couldn't seem to pull off that lower lid catching the light. 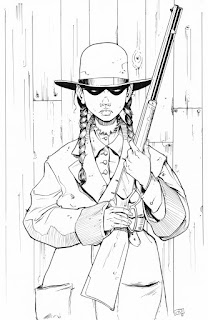 Then there is the Dragoon Pistol cover, this was actually my favourite of the two, from the beginning the Gun is massive in her hand so I think it suits her oversized coat and hat… unlike the rifle which was big on her but the pistol looked bigger and had more symmetry to the whole set up o the art I think. And there you have it. 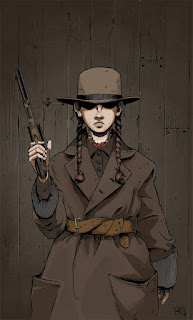 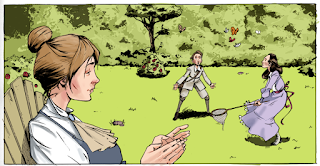 Still trying out some methods on colouring Butterfly Gate. this panel is from one setting of the the first episode, quite bright and blissfully sunny day. later there should be some shifts in the tone as the 'enfant terrible' head into a deeper section of woodland. this is still quite rough so any crit or advice is more than welcome.

Posted by Chris Wildgoose at 04:31 No comments: