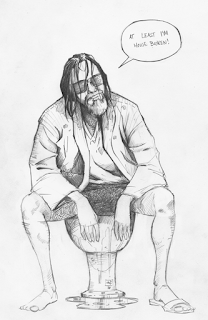 Found myself on a bit of a roll with sketching the Dude today so i thought i may as well throw up this one too. I'm actually ahead of myself for once. I think i messed up the toilet a bit, but it was a quick one so...
This is from one of my favorite scenes in the film. "Where's the money shit head!"
Posted by Chris Wildgoose at 16:28 No comments: 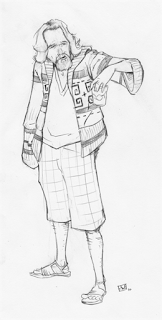 I'm i the middle of moving house at the moment. Meanwhile managed to squeeze in a sketch of the infamous 'Dude' from the 'Big Lebowski'
I never ever have any reason not to watch this film. should be sketching him more this week.
Posted by Chris Wildgoose at 11:11 No comments: 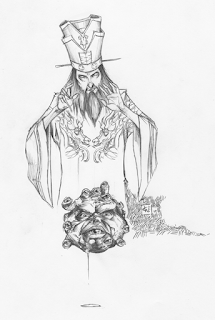 A little bit delayed but finally sat down to do a Lo Pan sketch, because its so late i threw in a little bonus monster. if you know 'Big Trouble in Little China' you'll know who he is.
Monsters are fun to draw damn fun, i get jelouse readng The Marquis by Guy Davis, he looks like he has so much fun inveneting horrible monsters. think i might make an effort to experiment with more beasts.
So i'm going to leave him now for a while and move on to another character. My brother has suggested the Big Lebowski's 'The Dude' so going to sit back have a white russian listen to some strike compilations and have a few plugs at him.
Posted by Chris Wildgoose at 10:16 No comments: