Sketch: Dr Who - Day Of The Moon 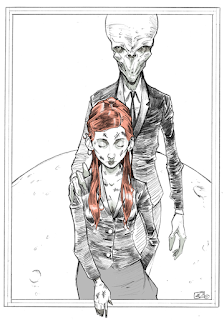 Very happy That The Doctor has returned. from the first episode it looks like were in for a brilliant ride.
Did a warm up sketch today from the clips they've shown of the next episode 'Day Of The Moon.
couldnt seem to settle on any form of full colours so i gave up.
Also check out Francesco Francavilla's Impossible Astronaught piece, awesomeness
Posted by Chris Wildgoose at 08:39 2 comments: 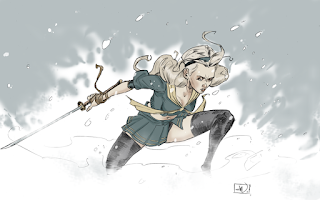 Coloured up a quick sketch, loved the film, fell in Love with BabyDoll.
Posted by Chris Wildgoose at 16:33 2 comments:

Finally posted a new preview for Dream Solver, you can read through here:

Meanwhile i'm going to sit in the corner to cringe and wait on whatever comments may get thrown in. please leave crits or comments if you have time.
This is the book that propelled me into the comics realms, so there is a lot of finding my comfort zone both technically and stylistically so i think my style has a lot to be desired, although i am happy with most and i think i've stepped it up a notch as the book goes on....but you'll have have to wait and see about that. anyway enjoy.
Big thanks to Luke for waiting out on me to get things done on my end, and to Lauren for jumping into the pot midway and making it look even better.
Adios
Also keep checking the Dream Solver Blog for more updates!
Posted by Chris Wildgoose at 09:12 No comments:

just got wind of a time video of me doing a sketch for Stuff Magazine. I did my first sign and sketch session last week at Orbital Comics in Leicester Square last week (sorry forgot to post info about that..nerves) but before the session Luke from Stuff Magazine asked me to do a sketch for the online magazine and to film it with some flashy tech. so here it is the ...."Stuff Bot".... literally did it on the spot and a short time to film so that my excuse for any mess. anyway Enjoy:
Stuff Bot Sketch Vid

Also the guys at Orbital where kind enough get me on their Podcast show, i had a really good laugh with them for a few minutes while they asked me some stuff about how i got on True Grit and general who what when and why about me. unfortunately the sound quality ended up pretty naff so hopefully going in to do another quick Q&A soon so i'll post up that i they ever let me back on for a mumble.
I had a really awesome first time sketch session at Orbital on the behalf of the Guys at the CataWiki site so a nice little shout out to them. but i'll go into that session more in another post because i need some space to babble on about that properly. meanwhile, thanks to those who showed up had a chat and watched me sketch like a nervous chimp.
Posted by Chris Wildgoose at 12:54 No comments: 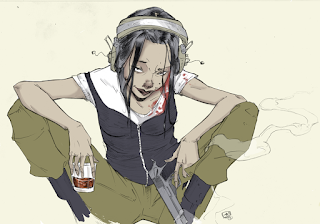 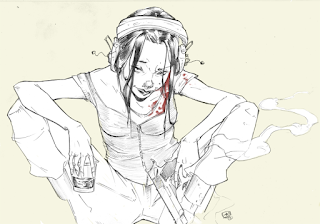