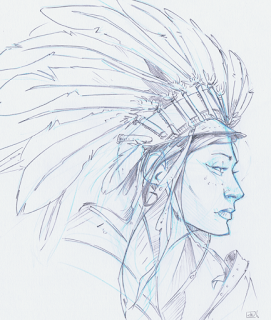 Meanwhile i'm working at the design of the next comic i'm working on with Benjamin Read. We have a couple of separate comics in the works at the moment, one of them being 'Butterfly Gate' which will be an episodic Web-comic (trying to get a couple of issues in the bag before we release anything) and 'Porcelain' this is going to be a full graphic novel. as soon as the pre-work is done I'll be diving head first into that for a few months hopefully to get it out by early next year.
I'll post up some details on Porcelain when Ben and i have our next head bang about it all. i cant wait to show some of this stuff off and get stuck in on actual pages, Mr Read has crafted a beautiful story and we've been talking and brain storming it for nigh two years now so I've told myself to give it nothing less than my A game. so lets hope i don't disappoint!
Posted by Chris Wildgoose at 04:39